Yes, we are taking orders for

St Patrick's Day is coming soon. What will you do this year to celebrate? Wow them on St Patrick's Day by decorating their yard with 30 big green shamrocks in the yard. Or just as great, put them in your own yard and have a party!

All displays include a Happy St Patrick's Day sign, and you can customize the message for five dollars more. A 5x7 card with space for a personal message is also included with each display and will be placed by the front door.

A yard full of shamrocks is definitely the classic and ever popular, but creative ideas abound. You can pair shamrocks with the big red hearts and a custom sign for "I love Ireland" or "We love Irish everything". Put big red lips with shamrocks for "Kiss me, I'm Irish". And smiley faces with shamrocks for "Your Irish eyes are always smiling".

We deliver everywhere in Arizona 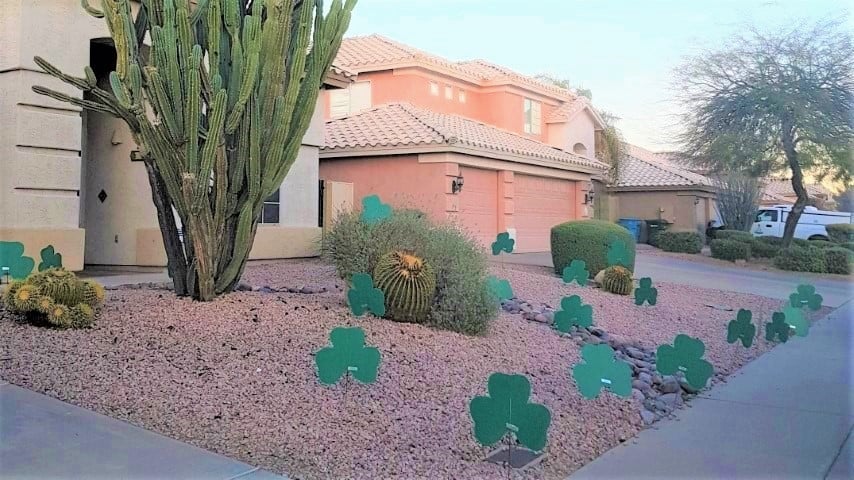 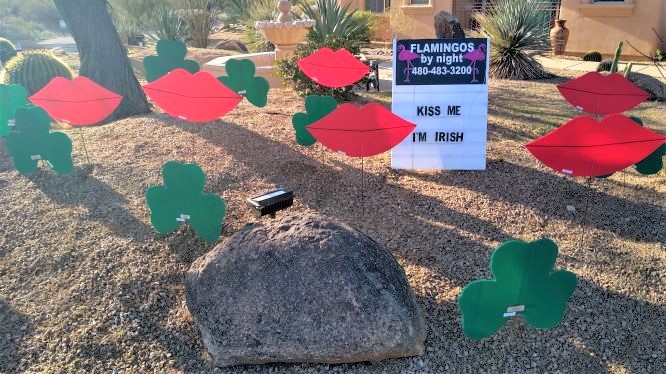 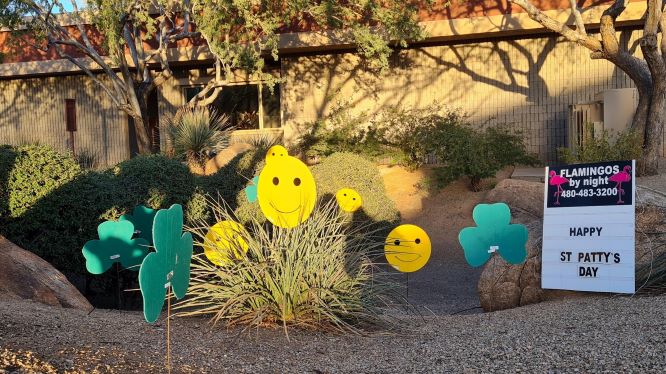 Who was St Patrick and why Mar. 17th?

Because St Patrick, a patron saint of Ireland, was a cool guy. According to prominent tale, St Patrick rid Ireland of serpents. Which was really a great marketing line, since snakes were wiped out in Ireland in the last ice age. The "serpents" that St Patrick eradicated from Ireland may describe the druids or pagan worshipers of serpent or serpent gods.

He grew up in Roman Britain, yet was captured by Irish raiders and taken to Ireland as a servant when he was a young person. After some years he returned to his family in Britain, entered the church, like his dad and grandfather before him. He later went back to Ireland as a missionary. St Patrick is believed to have passed away on March 17 in or around the year 493 and is buried under Down Cathedral in Downpatrick, Ireland.

Luke Wadding, a Franciscan scholar birthed in 1588 in Waterford, on the south coast of Ireland, was influential in guaranteeing that the anniversary of St Patrick's fatality ended up being a feast day in the Catholic Church. Numerous Catholic churches commonly allocate St Patrick's Day to an additional day if March 17 falls throughout Holy Week.

Why do we celebrate St Patty's Day? To have a great party and get kisses, of course!

Numerous Irish immigrated to other countries of the world, including Australia, Canada, the United Kingdom and the United States, in the 19th and also 20th centuries. Many Irish customs, including the St Patrick's Day events, became rather prominent in these nations. In fact, the larget St Patrick's Day parade in the world is in New York City. And the Irish love to party. So be Irish for the day! 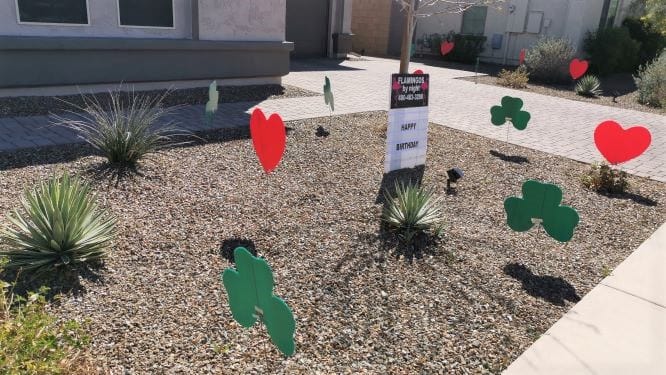 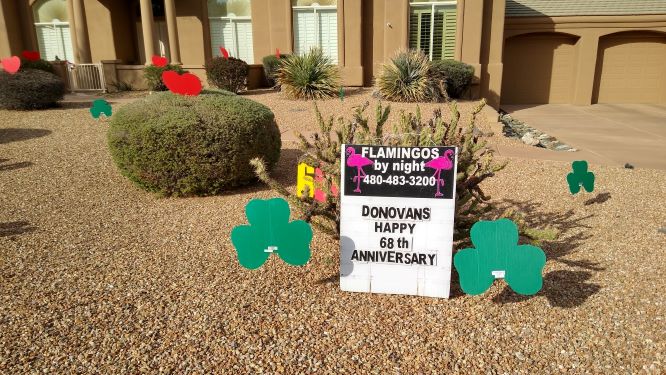 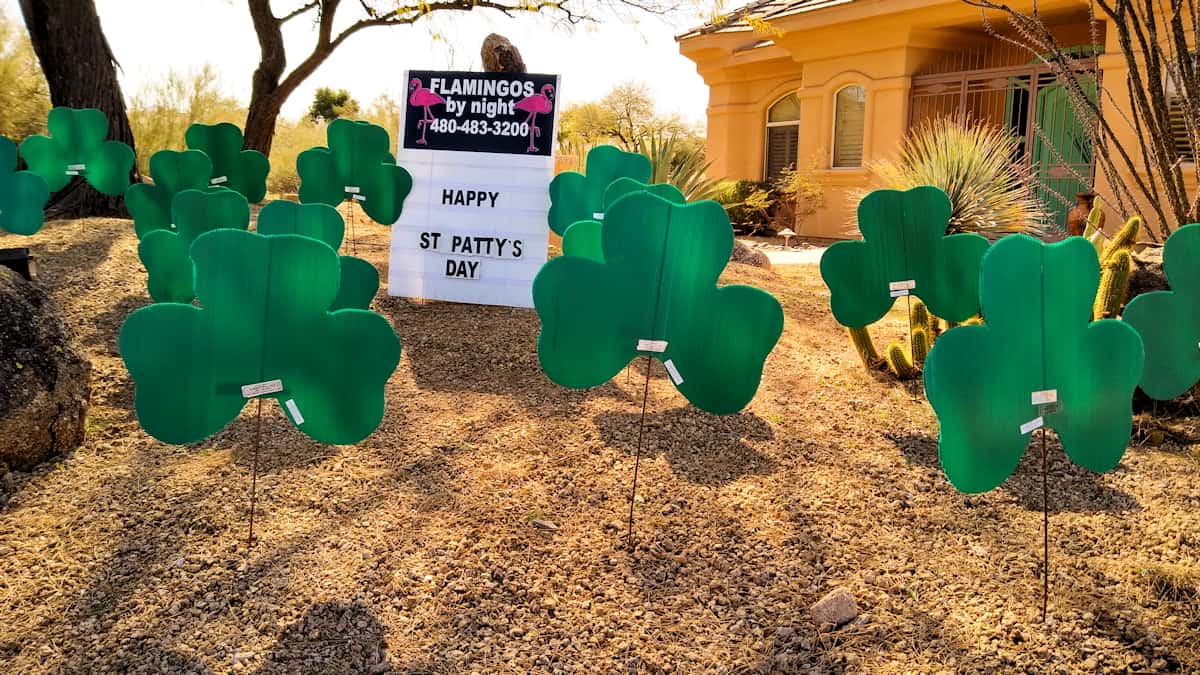 Make this St Patrick's Day memorable. If you want to create a big splash, send in our shamrocks and birds. We are more than just flamingos. We have penguins, too, and they come dressed for the party. There are over fifty items to create a custom display for this or any other occasion. We have examples on our photo gallery page, FaceBook page, Instagram pages and our YouTube Channel. 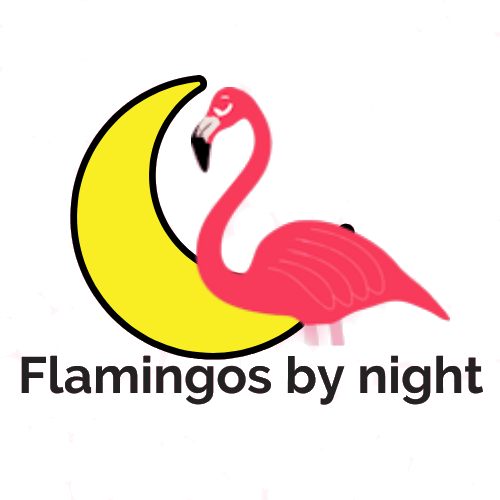